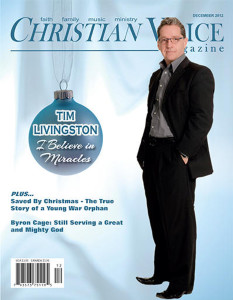 "More Than Enough" climbs to #10 on Weekly Singing News Radio Chart for the Week ending July 25, 2015

Nashville, TN January 14, 2015.  Les Butler, Family Music Group and Butler Music Group are pleased to announce that four of their artists were represented in the SCOOPS Top 100 of 2014.

Tim Livingston came into the rankings with the number 8 song, “I Just Miss You.”  Tim, who has won numerous awards such as the 2012 ICGMA Songwriter of the Year, 2013 CGM Horizon Male Vocalist of the Year, 2014 Gospel Music FanFair “Male Vocalist of the Year” and “Song of the Year,” has also reached the Top 20 in the Singing News chart for his single, “Over the Next Hill.”  Tim's SCOOPS Top 100 song, “I Just Miss You,” is a tribute to his late father and Gospel Music pioneer-Norm Livingston.  Tim Livingston's heritage, heart and hope for the future is establishing him as a mainstay top artist for years to come. Family Music Group is thankful to be part of the ministry of Tim Livingston and extends congratulations to him on this well deserved top honor. 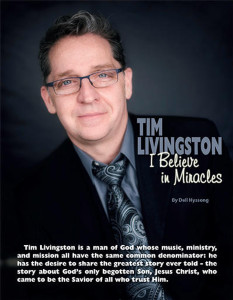 September 30, 2014 -I JUST MISS YOU project is released Available at www.TimLivingstonMusic.com & iTunes & CDBaby

HALLELS.com album Review of I JUST MISS YOU by Sr Editor Timothy Yap

Prime Cuts: I Can't Erase the Message, I Just Miss You, You're Not the Only One

The best Christian songs are bridges.  They are able to abridge the vast reaches of two worlds:  the world of Holy Scripture as well as the narratives of our current happenstances.  If a song only fritters along the passing fads of today's concerns and issues, they are bound to be devoid of any substantive life-transforming gravitas.  On the other hand, there are some that are so steeped in the pages of Holy Writ that they come across as weightily boring bereft of contemporary significance.  One of the most glowing compliments one can say about Tim Livingston's brand new record "I Just Miss You" is that he does a great job at building bridges.  Though many of the songs hover around his own stories of how he misses his own dad, the Gospel pioneer Rev. Norman Livingston, he is always careful to connect these stories to Scripture and drawing out contemporary applications to our lives.

Having grown up with Southern Gospel and Christian country music, Livingston has been singing since he was 15.  Today he wears many hats:  not only is he singing and releasing albums, he also serves as a pastor and he is also the President/GM of Radio Broadcasting and Digital Media Corp and Gospel concert promotion.  His former release "Here's a Miracle" produced 4 Radio #1 radio singles in Christian Voice & Cash Box including, "Here's A Miracle", "Grow through This Valley", "He Gave All He Had" and "Over the Next Hill" that also became Tim's first Singing News Top 20 Song.  Tim has had numerous award nominations including being awarded Songwriter of the Year by the ICGMA in 2012 and winner of the 2013 CGM Horizon Male Vocalist of the Year, and 2014 Gospel Music FanFair "Song of the Year" (He Gave All He Had" 2014 ICGMA Crossover Artist of the Year.

Produced by Les Butler, Livingston's new release "I Just Miss You" features 11 brand new songs written or co-written by Livingston.  Kicking off the proceedings is "More Than Enough" --- a bold and affirming testimony wrapped in a country shuffle with lots of rustic sounding pedal steel - this track finds a faith-imbued Livingston singing "one thing in this life I'm sure of, God is more than enough." "I Can't Erase the Message" is a stopper to the heart.  Unfolding the narrative of how his late father left a message on Livingston's answering machine shortly before he passed away, Livingston draws the connection to how God has left his message of salvation for us.  And it would be regretful remiss should we not return God's message.  Sung with lots of deep-seated emotions over a gripping narrative, "I Can't Erase the Message" is a song that is hard to erase from our memories once when we have heard it.

Drawing inspiration again from his departed dad is the title cut "I Just Miss You."  But never one to leave us in the abyss of dismay, the song also reminds us that we will also see our departed dear ones again in greater glory at our Lord's return.  Putting his homiletical skills to work, Livingston does a fascinating job in teasing out the impacting message of the story of Lazarus in "Take Him to that Place."  With pointed questions like "have you ever felt that your prayers have never left the room?,""You're Not the Only One" has an arresting way of grabbing us at the heart as Livingston brings hope to those of us who are suffering or in the season of waiting.  And if you are looking for some propulsive spirited workout, look no farther than "I'm in Good Shape."

If your musical tastes lean towards country or Southern Gospel or you just want an album of well-crafted tunes soaked in the teachings of Scripture yet still has the ability to tell the stories of our souls, Livingston's "I Just Miss You" won't disappoint. 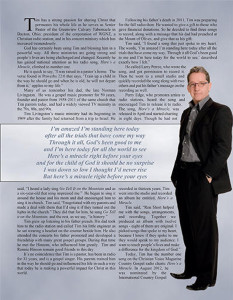 Awarded the Christian Voice Gospel Music FanFair "Male Vocalist of the Year" and "Song of the Year, He Gave All He Had"    May 17, 2014

"Over The Next Hill"  Music Video is released on www.YouTube.com/TimLivingstonMusic
This latest video single was shot on location in Jerusalem, Israel.   February 10, 2014

"Here's A Miracle" is #1 Song in Cashbox and Christian Voice CG for December December 1, 2012 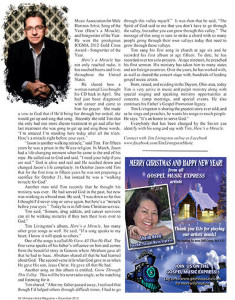